When it's time to call it quits... 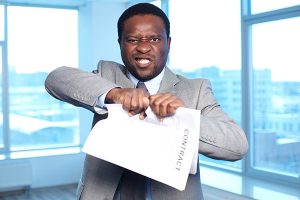 …and end your agreement.

The other party may have breached, but does that mean you can terminate your contract?

A recent case has highlighted that terminating a contract for the other party’s breach is not as simple as it might appear.

Where the other party is not carrying out their obligations as you think they should, or they have done something that you believe to be against the terms of your agreement, you might just want to end the relationship as soon as possible. But if you want to terminate the contract, you need to plan carefully before taking any steps, in order to achieve a successful termination.

Most contracts include a right for the other party to remedy any material breach and avoid having the contract terminated. This is likely to include doing all of the following, before you take any action to terminate the contract:

In this recent case (Stobart Capital Ltd v Esken Ltd), the judge observed that, for a breach to be capable of remedy, the key question was whether the party at fault should be able to remedy the issue going forward, rather than whether they could nullify or fix the damage already done.

The judge did also indicate that there may be breaches where the breach could not be remedied, such as in the disclosure of confidential information in a manner not permitted by the relevant agreement.

The judge also noted that if a party failed to notify the other party of the matters it regarded as being a breach when it first became aware of them, this could count against that breach being seen as material, or being such as to justify immediate termination. Although this would obviously depend on the circumstances, it does suggest that prompt action to notify of a suspected breach, giving the other party a reasonable opportunity to put things right, will improve your chances of being able to terminate if they fail to do so.

In this case, the agreement between Stobart Capital and Esken allowed either party to terminate with immediate effect by giving notice, if the other party had committed a material breach of its obligations under the agreement and, where such breach was capable of remedy, failed to remedy that breach within 28 days after receiving notice requiring the same to be remedied.

This is a useful reminder that even if your business is in the right, and another party has breached your agreement, if you don’t take care over how you manage the breach and termination process, you may find yourself at the wrong end of litigation!

If you are in dispute with another party, or think a dispute is imminent, give Devant a call – we will give you our honest, no-nonsense advice on how best to proceed, to help you meet your business objectives and reduce the risk of claims against you.

How to use relational contracting to improve your business results

Business Lessons from the year of Covid